The Oddbods Show is a Emmy-nominated non-dialogue TV comedy series. The show spans over 3 seasons, with around 180 episodes total, with each episode being about 7 minutes long. It features the crazy world of seven colorful characters with very different personalities living together in a cul-de-sac, where everyone tries their best to get along with each other. It doesnt happen all the time, however.

“Zee Force Five” is a 22-minute summer special featuring Zee, the laziest oddbod with an unsatiable appetite. In this episode, Zee “borrows” Bubbles’ duplicator to clone himself in order to escape work, he only gets into more trouble as the Clones  aren’t exactly the most hardworking bunch either…

Antiks is a Youtube animated series featuring the lives of two Ants; Boo and Joey as they struggle to survive in the big world around them.

In the episode “Wind”, Boo and Joey pop out of their home only to find monstrous hurricanes blowing all around them. The duo have to fight against the forces of nature in order to make their way back to safety.

Gamer Grill is my very own 4Koma series  featuring the daily lives of 3 gamer girls; Oriette, Ceshil and Bucki.

Here’s an excerpt of a project i was fortunate to be a part of.

Sharkdog is a short animated series  property of Nickelodeon. Its a series about the daily life of a young boy named Max and his half-shark half dog pet named… (you guessed it) Sharkdog.

In the episode “Hole in the Wall”, Max comes home to realise Sharkdog has made a hole in his bedroom wall. The two try to do everything they can so that mom does not find out.

Here’s another episode titled “Leash”,  when Max tries to take Sharkdog on a walk. To prevent Sharkdog from running away like he always do, Max tries to fit a leash on him. Sharkdog doesn’t like it. Not. One. Bit. 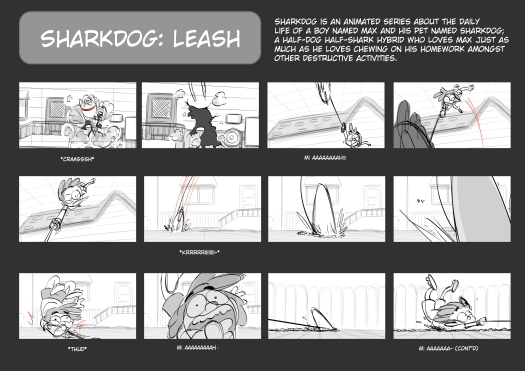 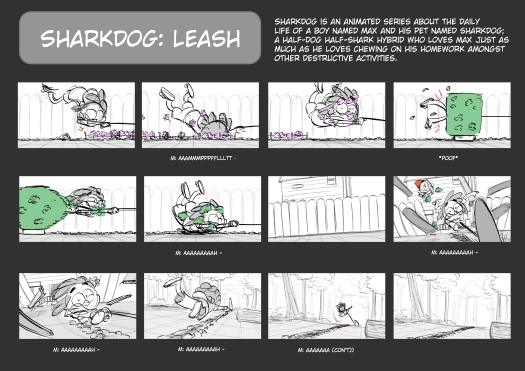